A room with a Universal view

According to the Orlando Sentinel, Universal is building an on-site apartment complex with the intent of providing housing for their Team Members.


This is an awesome strategy for Universal, and a great idea to provide affordable apartments to keep workers (not everyone is a great budgeter and can afford to live off of the wages they get), and keep them on site (how can you be late when you life that close to work?)


Anyone who's worked for Disney can tell you it's a pain trying to find a nice apartment complex close to work. Due to the fact that Disney is twice the size of Manhattan, you can understand the challenge. The closest places are, well, shall we say, less than desirable. Sabal Palms is across from Vista Way, Buena Vista Place is right behind the Magic Kingdom, and the latter provides walking access to the Magic Kingdom cast parking lot and property control (which, on a side note, now sells low priced food staples to tie in with Disney's Healthy Living drive), but living there is usually only a temporary solution as low cost living usually brings low cost tenants, which usually brings crime. Not to be a sensationalist, but a friend of mine lived there and did see someone get shot. Could that happen anywhere? Sure, but it happened.

Universal's challenge is that it backs up to the Dr. Phillips area - a nicer (more expensive) part of Orlando. MetroWest is nearby, which has some nicer, affordable places, but you're getting farther away. I used to live in MetroWest on the corner of Conroy and Kirkman, and drove through Universal on my way to school at Rosen - getting to Universal's employee parking on Turkey lake is probably a 10-14 minute drive down some of the busiest roads in the area.

The structure is going to be built behind the Men in Black ride, approximately where I put this lovely X on the map below. (Don't you love MS Paint?) 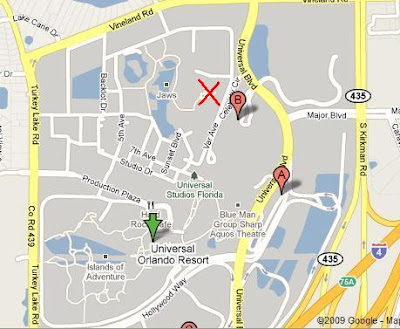 Technically, Universal doesn't own the properties - it sold the land last year for about $8 million dollars (guess that real estate bust didn't hit them) - but worked together with the management company to set some ground rules - IE, no buildings higher than 45 feet (to protect sight lines in the park), and a clause that doesn't let the tenants make noise complaints about events like Halloween Horror Nights or Rock the Universe.

Universal already has plenty of experience with noise complaints - Islands of Adventure's signature attraction, The Incredible Hulk, cannot be operated after a certain time of night due to the neighborhood's noise restrictions. The ride itself isn't noisy at all, it's the rider's screams that put it over the top.

Disney has its own apartment complexes, but in a different style. I'm sure we're all familiar with Vista Way and its followers, Chatham Square, The Commons, and Patterson Court. While not physically in the confines of Disney, it houses nothing but Disney College Program participants, providing a safe, convenient place for that workforce.


What are your thoughts on Universal's decision to move forward with these units? By the way - in 10 years, the development has the right to turn all the units into condos - because that's worked out so well for all the other developments that did that in the area...
Posted by Jeremy Wilcox at 12:44 PM

About The... Viewmaster? Author just seemed so bland...